KUALA LUMPUR, April 7 ― The Communications and Multimedia Minister, Datuk Saifuddin Abdullah, has announced yesterday that the Jendela Phase 1 targets for end-2022 will be expedited and delivered by the end of this year. The move to fast-track JENDELA is due to the planned launch of 5G which is currently set for Q4 2021.

The Malaysian Communications and Multimedia Commission (MCMC) has revealed the Jendela performance results for the last quarter today. It showed that the telcos have mostly exceeded its fixed and mobile broadband targets. 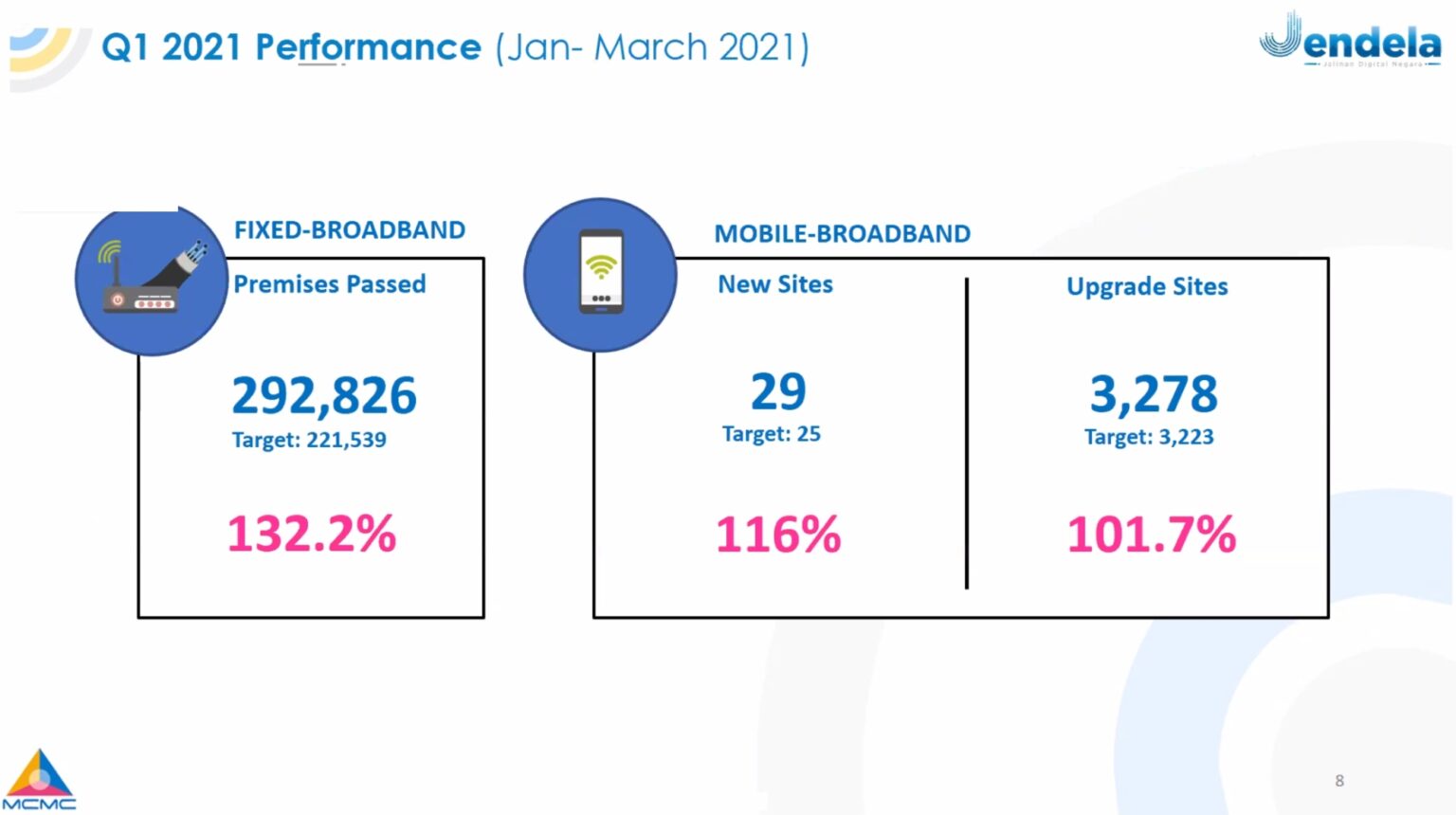 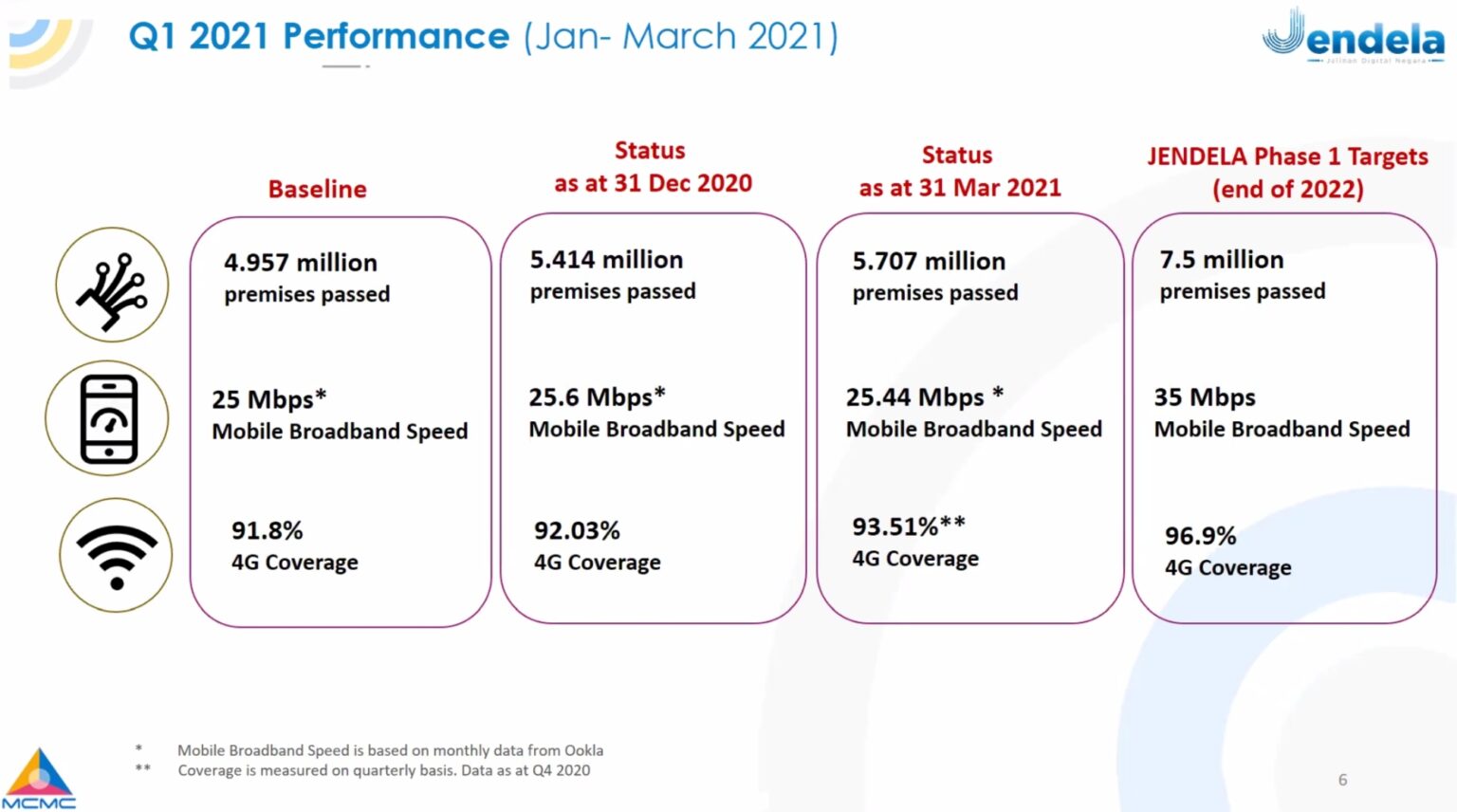 As of March 31, 2021, Malaysia has a total of 5.707 million premises with fibre and achieved 93.51 per cent 4G population coverage. However, there’s hardly any improvement when it comes to average download speeds which Jendela aims to bump to 35Mbps.

According to the report, the current average speed is 25.44Mbps, which is an improvement of just 1.76 per cent. In fact, the average speeds dropped slightly from 25.6Mbps recorded in December 2020. MCMC is using monthly data for Ookla to record its mobile broadband speeds. 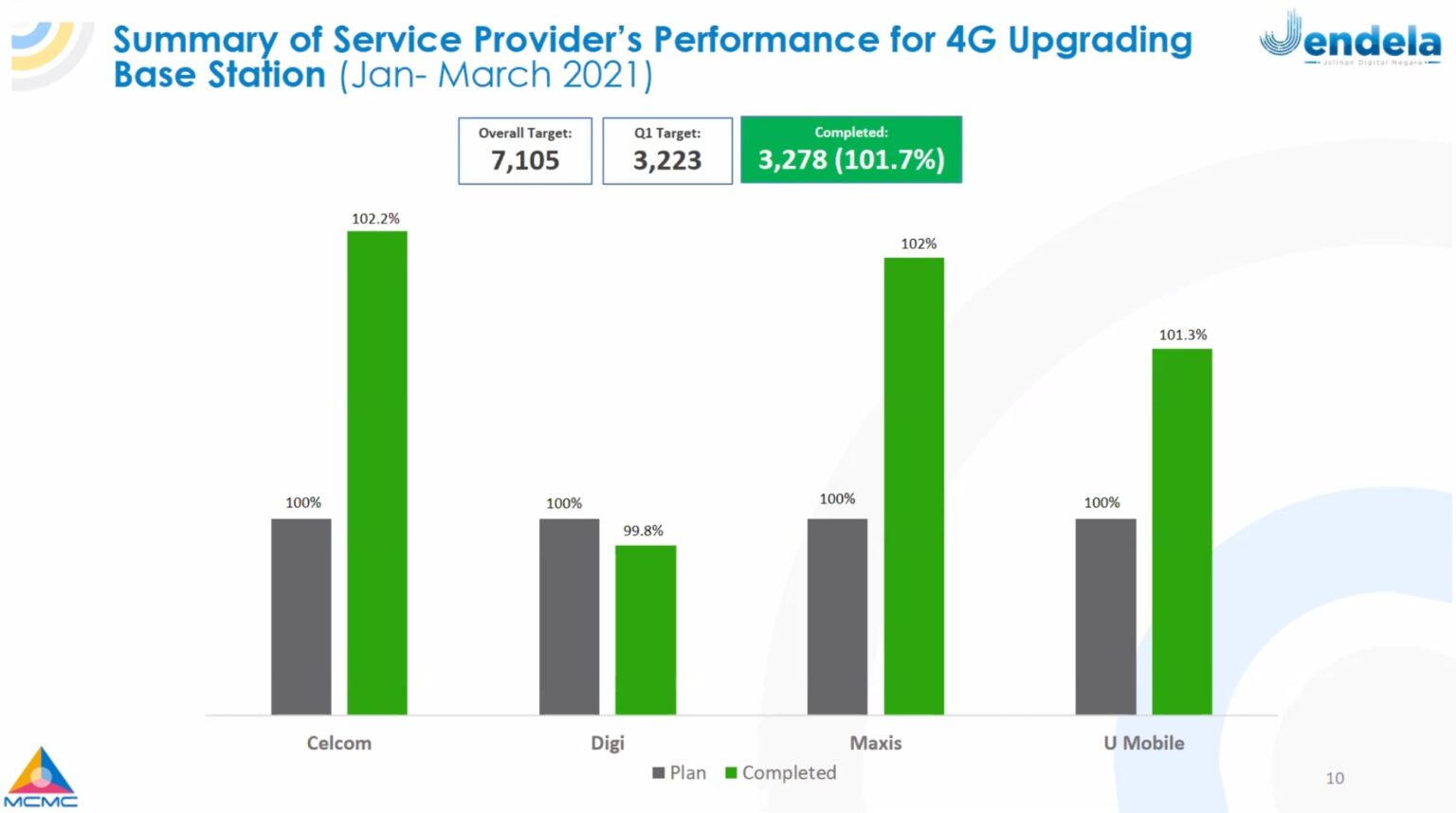 Based on the published numbers, Malaysia’s 4G coverage is increasing at a rate of 1.48 per cent per quarter. Plan submissions for Jendela Phase 1 project were closed on March 31, 2021 and the implementation is said to begin in Q3 2021. The Phase 1 projects will see new towers being deployed at 1,661 locations in 106 clusters, mostly in rural areas of Malaysia.

Despite the expedited targets, MCMC Chairman Dr. Fadhlullah Suhaimi is confident that the 4G coverage targets will be met by the end of this year. As highlighted in the report, one of the immediate solutions to provide faster connectivity in rural areas is to deploy satellite broadband at 839 locations using the Universal Service Provision (USP) fund.

When it comes to fibre coverage, it is currently progressing at a rate of 300,000 premises per quarter. Early this year, TM has announced that it has exceeded its Jendela targets and are committed deliver another 300,000 fiberised premises by the first half of this year.

If we look at the report, there are 1.79 million premises remaining under Phase 1. With 3 quarters left in 2021, the industry players will need to double up their fibre deployment with a combined average of 600,000 premises per quarter.

The biggest area of improvement needed would be improving average download speeds. Despite the achievements made in upgrading existing towers, Malaysia is still far from hitting its target of delivering average mobile speeds of 35Mbps. As reported by Ookla’s Speedtest in December, Malaysia’s mobile speed lags behind 6 Asean countries including Vietnam, Laos and Myanmar.

3G to 4G migration on track 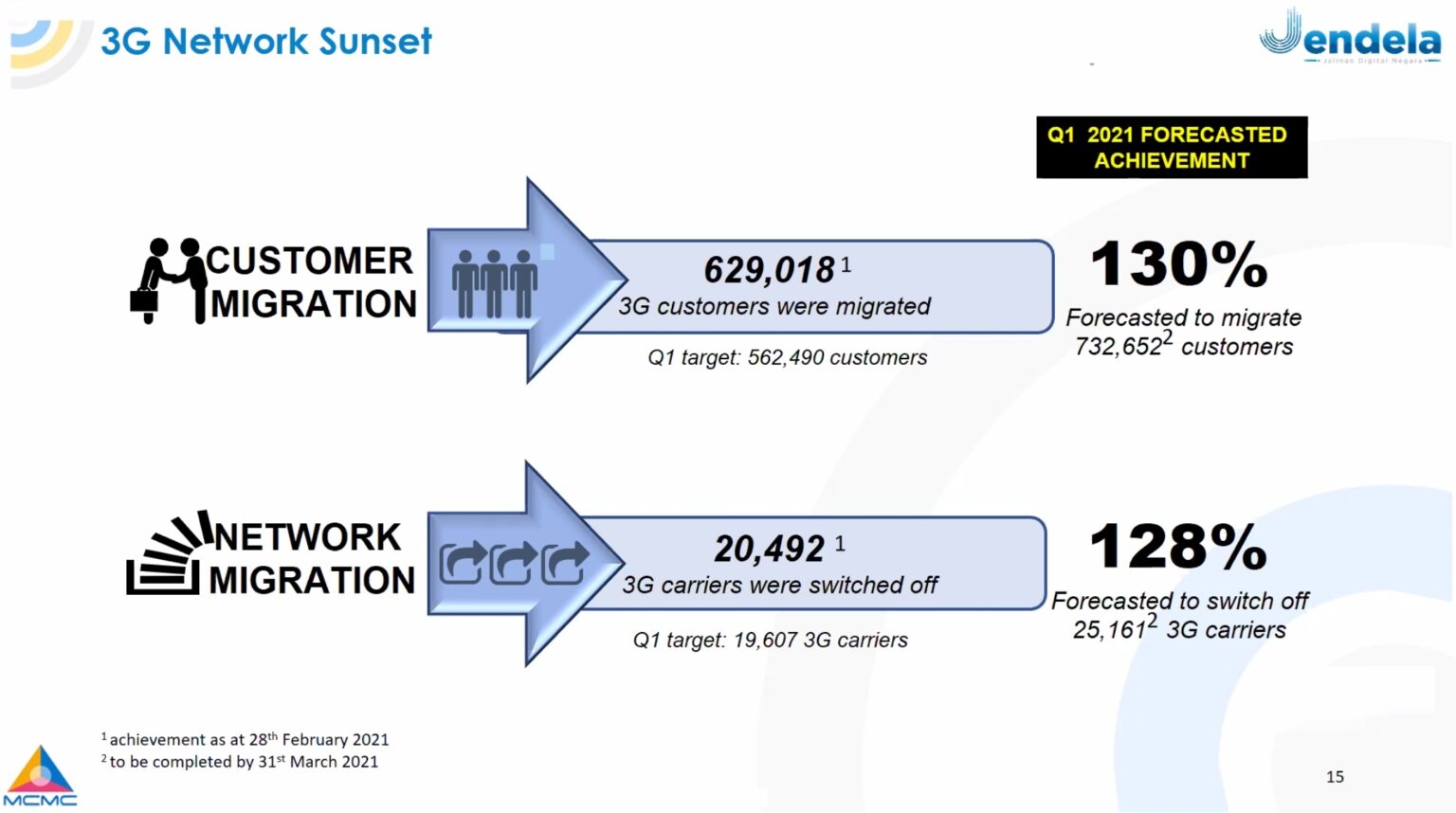 As announced last year, Malaysia aims to shutdown 3G networks by end of this year, to free up spectrum for 4G use. The MCMC said that a total of 629,018 customers have switched to 4G devices which is 130 per cent of its original target and a total of 20,492 3G carries have been switched off.

The MCMC said that the 3G shutdown will be done gradually according areas. During the media briefing, Maxis CEO Gokhan Ogut shared that Voice Over LTE (VoLTE) adoption is happening faster than expected. If a customer doesn’t have an VoLTE device, they could still make calls via the 2G network. ― SoyaCincau

Transport minister: Average price of flight ticket to Sarawak is RM360, can be reduced with more flight frequency

Sarawak DAP is being realistic in next month’s state election, says its chairman

KUALA LUMPUR, Dec 1 — Seputeh MP Teresa Kok is pushing the education minister to take an official stand on the case of a teacher who sued his former student… [...]

KUALA LUMPUR, Dec 1 — The federal government should stabilise the prices of essential goods that have reportedly been soaring in Malaysia, by using the RM3 billion that would be… [...]

KUALA LUMPUR, Dec 1 — Malaysia reported an additional 55 deaths due to Covid-19 as of 11.59pm yesterday, including eight who died before reaching hospitals. The Health Ministry’s CovidNow portal… [...]

KUALA KANGSAR: The Magistrate’s Court here on Wednesday (Dec 1) has set Jan 10 to mention a drug case involving an actor, a director and an assistant director. Read full… [...]

SEREMBAN: The Customs Department has foiled an attempt to smuggle out some 305kg of methamphetamine worth almost RM11mil at the Tanjung Pelepas Port in Johor. Read full story [...]

Proposal to brand Sabah, Sarawak as mainland Malaysia will be raised in Dewan Rakyat on Wednesday (Dec 1)
1 December 2021

KUALA LUMPUR: The question on whether the government intends to brand Sabah and Sarawak as mainland Malaysia, being the two states having a total land size of 198,354 sq km,… [...]